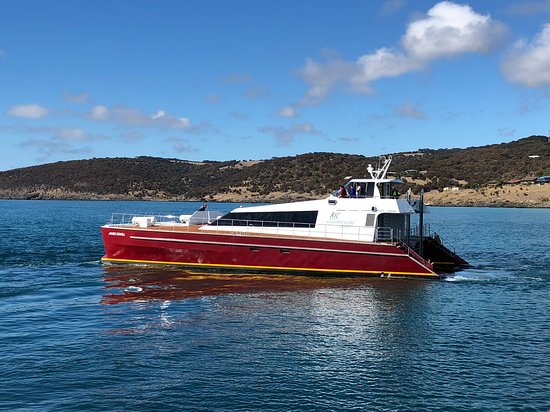 A ferry operator is now offering discounted return fairs of $25 dollars when it is declared safe to re-enter Kangaroo Island.

Kangaroo Island Connect has halved the cost of their tickets in a bid to attract visitors and help rebuild the island's tourism economy following devastating bushfires.

To purchase the cheaper tickets, visitors must stay on Kangaroo Island for at least one night to support local businesses. The offer is open for travel from Saturday 25 January 2020 until 30 June 2020.

Managing Director of Kangaroo Island Connect, David Harris, said tourism and agriculture are key drivers of the economy and are interlinked.

"There is a massive job ahead to get the economy back on its feet. There has been wonderful charitable support, but we must get the Island economy trading again and as soon as possible".

Kangaroo Island Connect will follow the advice of the South Australia CFS to ensure the Island is safe for tourists to travel.

A proposal to offer SeaLink passengers Government-backed subsidies in the wake of the bushfires has been slammed by Kangaroo Island Connect's Managing Director.

David Harris has told AdelaideNow the idea would unfairly benefit SeaLink over his own company, which runs daily services between Cape Jervis and Penneshaw.

“I’ve got nothing against Sealink, I think they run a very good business, but why would the Government use public money to subsidise their fares back to $18 more than our prices?” he said.

“Once you start subsidising transport services the innovation and efficiency gets completely corrupted.”

Premier Steven Marshall has this week confirmed the Government is considering a range of ideas for increasing tourism in the region including covering some of the ticket price for the SeaLink ferry service.

The Opposition previously called on the Marshall Government to provide a 30 per cent subsidy on ferry fares for six months as well as a free return ferry trip for anyone who had helped fight the bushfires or assisted in the recovery effort.

Photo of Kangaroo Island Connect is courtesy of TripAdvisor